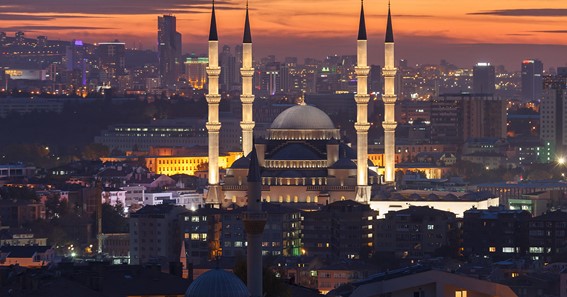 The capital of Turkey is Ankara which was known as Ancyra and Angora in history. It is a modern city with a huge Ataturk Mausoleum complex. And it is the second most important industrial city after Istanbul.

Ankara is a significant commercial and industrial city situated at the center of Turkey’s road and railway networks. It is considered a green city because of its green areas per inhabitant, at 72 square meters per head.

It is the home for Honey, pears, and muscat grapes. Do you know? Which is the second-largest city in Turkey? It is Ankara.

Now, you know what is the capital city of Turkey?

When Did Ankara Become The Capital Of Turkey?

Ankara, The Capital Of Turkey Facts

Here are some facts which make you more aware of Ankara

The total area of Ankara is 9,468 meters square and it makes Ankara the second-largest city among the other Turkey cities. While the population of Ankara is 5.663 million as of the year 2020.

Ankara city and its province are situated in the Anatoila’s central region of Turkey. It is connected with the western suburbs of the city to the Ankara River, which is a territory of the Sakarya River.

The climate of Ankara is cold semi-arid and it falls under the category of the Trewartha climate classification. It has a temperate continental climate with snowy and cold winters due to its elevation and inland location. Summers are hot and dry and rainfall occurs mostly during the spring and autumn.

Ankara had exported the Mohair and Angora wool internationally for centuries. It also exports goat and cat skins, gum, wax, honey, berries, and madder root. Ankara is especially famous for its Kalecik Karasi and Muscat Grapes, and its Kavaklidere wine.

The popular sport of Ankara is Football but you can see other sports also.

Places To Visit In Ankara

Here are some best places to visit in Ankara are given

Is The Capital Of Turkey Istanbul Or Ankara?

Is Istanbul Still The Capital Of Turkey?

No, current Turkey’s capital is Ankara.

Are Ankara And Istanbul The Same?

No, both are two different cities in Turkey.

When Did Turkey Change Its Capital?

In 1923, Turkey changed its capital from Constantinople today’s Istanbul to Ankara.

Now, you know what’s the capital of Turkey?  It is Ankara. It is the home for the performing arts, and the center for the State Opera and Ballet, the Presidential Symphony Orchestra, and several national theatre companies. Ankara is a city that has various universities and colleges. If you want to pursue your education or higher degree then you can move to Ankara. Ankara University, Hacettepe University, Baskent University are the main universities in the capital of Turkey.

To Know Some Great Stuff Do Visit WeJii

To Know Some Great Stuff Do Visit WhyBenefit

To Know Some Great Stuff Do Visit ZipCodesPro

To Know Some Great Stuff Do Visit WhatIsFullformOf

To Know Some Great Stuff Do Visit Largably