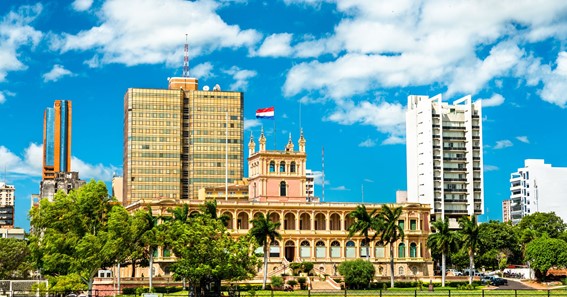 What is the name of the capital of Paraguay? Guess what? Don’t Know? So, let’s learn it with the help of this article. As proceeding further you must know that Paraguay officially is the Republic of Paraguay and it is a country located in the South American continent. It shares a border with Argentina to the south and southwest, Bolivia to the northwest, and Brazil to the east and northeast. We will discuss everything about Paraguay like the paraguay language. Now, let’s start and learn about the capital of Paraguay?

The capital of Paraguay is Asuncion, it is a city that occupies a promontory and descends to the Paraguay River near its confluence with the Pilcomayo. It was named an Asuncion when a stockade was completed there on the Feast of the Assumption in 1537.

Due to being located near to the river, Asuncion has tremendous beautiful flowering trees and several large parks. Also, it is a center of the densely populated region of Paraguay and has agriculture that is rich in maize, cotton, sugarcane, corn, tobacco, fruits, and cattle products also.

Asuncion is known as the Mother of Cities because of it is one of the first cities in South America to be founded by European explorers. It is the heart of South America, the land of water, and the Island surrounded by the mainland.

When Did Asuncion Became The Capital Of Paraguay?

In 1537, Asuncion became the capital of Paraguay. It was the first city of the Governorate of the Rio de la Plata.

Initially, Asuncion was not a popular city but the flow of immigrants from Europe and the Ottoman Empire between the end of the 19th century to every year of the 20th century. Leads to a change in the appearance of the city as many new buildings were built and it went through an era more prosperous than any since the war.

Let’s understand the history of Asuncion in short as

The income of  Asuncion has grown in recent years because of the construction of shopping malls and supermarkets in suburbs. In Asuncion, various important businesses, companies, and investment groups are headquartered. It is because this city has attractive and easy-going tax policies. The currency of Paraguay is Paraguayan Guarani.

The city Asuncion, the capital of Paraguay is situated between the parallels 25° 15’ and 25° 20’ of south latitude and between the meridians 57° 40’ and 57° 30’ of west longitude. This city is seated on the left bank of River Paraguay, almost at the confluence of this river with the River Pilcomayo.

The climate of Asuncion is humid subtropical in nature, it is characterized by hot, humid summers, and mild winters. Throughout the year relative humidity is high therefore, the heat index is higher than the true air temperature in the summer.

Places To Visit in Asuncion

There are so many places to visit out of which some places I have mentioned below. Let’s check it

Does Paraguay Have Two Capitals?

What Is Paraguay Famous For?

Not only famous but it is the heart of South America, the land of water, and the Island surrounded by the Mainland. It is famous for its large navy, without access to the sea it has large naval power. It is also known for its world’s biggest working hydroelectric power plant, on the river Parana.

How Is Paraguay As A Country?

Paraguay is a good and sage country here, the Government system is a presidential republic which means the chief of state and the head of government is the president. Overall the country is good but some problems are there like Corruption, organized crime, environmental destruction, systemic based discrimination, and also limited rights for women and children.

Why Is Asunción Famous?

Asuncion is famous as the Mother of Cities because it is one of the first cities in the South American continent to be founded by European explorers.

How Is Life In Paraguay?

Paraguay is frequently named the best country in LatAm to live in due to its climate, kind people, and slow pace of living. If you enjoy the tranquilo lifestyle and an endlessly sunny climate, you’re probably going to feel right at home when establishing your second residence in Paraguay – it will change your life.

Finally, you got the answer of what’s the capital of Paraguay and it is Asuncion. Above, you have studied the facts such as climate, economy, sport, places to visit, geography and it makes you more crystal clear about Asuncion. Now, you can make a plane to visit Asuncion because you have learned everything about it. Don’t get confused after reading the Republic of Paraguay. It is also a Paraguay but it is the official name of it. So, you have become known to everything about Paraguay including the capital of Paraguay

Hope We Have Covered All Your Queries Regarding Capital Of Paraguay

Asuncion Is Capital Of Paraguay

Asuncion Is The Capital Of Paraguay

Asuncion The Capital Of Paraguay

The capital Of Paraguay Is Asuncion City

What Is The Capital Of Country Paraguay?

What Is The Name Of The Capital Of Paraguay?

What Is The Name Of The Capital Of Paraguay Country?

Asuncion Is The Capital Of Which Country?

Which Is The Capital Of Paraguay?

The capital Of Paraguay Is Asuncion

To Know Some Great Stuff Do Visit clynerr

To Know Some Great Stuff Do Visit chenje

To Know Some Great Stuff Do Visit doescost

To Know Some Great Stuff Do Visit fyndblog