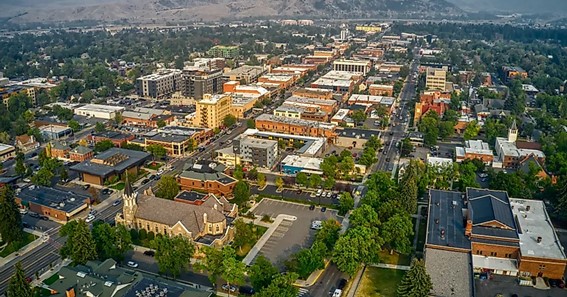 Are you looking for the capital of Montana? This article is about Montana’s capital city and some facts about it. Montana is not a country but a state located in the Mountain region of the Western United States. The state is popular because of its abundant natural and mineral resources, inducing copper, gold, sapphire, silver, manganese, lead, oil, and zinc. Besides this, Montana state is also famous for its natural beauty, diverse wildlife, and multiple national parks. Without further discussion let’s get started and know the capital of Montana.

The capital of Montana is Helena, which is also the county seat of Lewis and Clark County. The biggest city in Montana is not its capital but it is Billings, which has a population of just over 100,000 people. Besides the capital, Helena is the charming town that sits directly between Yellowstone and Glacier National Parks making it the perfect place to rest your feet as you travel between the parks.

In Helena, education plays a big role, and therefore the city has two separate colleges and the unemployment rate is incredibly low at only 3.8%. Currently, the city’s big claim to fame is the many businesses that have preserved historical elements of the city’s early years as well as being home to the training facility of the Montana National Guard.

When Did Helena Became The Capital Of Montana?

Helena, Montana became the capital of Montana in 1875 after Montana became a United States territory in 1864. In 1894, Anaconda was booming with the mining being done in nearby Butte. Therefore, the fight between the state capital erupted between Anaconda and Helena but Helena won the fight, by popular vote, and has remained the state capital of Montana ever since. Let’s know more about Helena,

Helena, The Capital Of Montana Facts

To know more about Helena, Montana considers the following facts that will tell you everything about Helena. Let’s read out them,

The capital city of Montana has a semi-arid climate, with long, cold, and moderately snowy winters, hot and dry summers, and short springs and autumns in between. Snowfall has been preserved in every month but July, but is usually absent from May to September, and normally accumulates in only light amounts.

In Helena, education is a major employer, with two high schools and accompanying elementary and middle schools for K 12 students as well as Helena College. The economy of the city is also bolstered by Fort William Henry Harrison, the training for the Montana National Guard.

The most popular sports being played in Helena are adult-league soccer, softball, and football. Besides this, Helena is also home to the Helena Bighorns, Carroll athletics, and a Junior Hockey club.

all interesting information is available for you on https://findingceo.com/

Places To Visit In Helena

The best places to visit in Helena are,

What Is Montana Known For?

Why Is Helena The Capital?

In 1875, Helena became the capital of Montana Territory. When Montana became a state, the fight for the location of the state capital pitted “Copper King” Marcus Daly of Anaconda against rival William A. Clark, who supported Helena. Helena won, and ground was broken in October 1898 for the new capitol.

Is Helena Montana A Good Place To Live?

Helena is a town in Montana with a population of 32,655. Helena is in Lewis and Clark County and is one of the best places to live in Montana. Living in Helena offers residents a dense suburban feel and most residents own their homes. In Helena there are a lot of bars, coffee shops, and parks.

How Cold Is Winter In Montana?

The average coldest month is January with typical winter temperatures ranging from a low of 15 degrees to a high of 55 degrees. The lowest recorded temperature was -43°F in 1936. For the winter sports enthusiast, the relatively low humidity and light winds provide an ideal climate for outdoor winter activities.

Is Montana Democrat Or Republican?

Montana has three electoral votes in the Electoral College. Trump won Montana 56.9% to 40.5%, a margin of 16.4%, down from the 20.4% margin he scored four years earlier. Prior to this election, most news organizations considered this a state Trump was very likely to win, or otherwise considered a likely red state.

After reading this article, you got the name of Montana’s capital and also more information about it. The city was founded as a gold camp during the Montana gold rush, and was established on 30th October 1864. And due to this gold rush, Helena would become a wealthy city. Now, you know everything about Helena. If in the future you visit Montana, then you will recall that the capital of Montana is Helena.

Hope We Have Covered All Your Queries Regarding Capital Of Montana

Helena Is Capital Of Montana

Helena Is The Capital Of Montana

Helena The Capital Of Montana

The Capital Of Montana Is Helena

What Is The Capital Of Country Montana ?

What Is The Name Of The Capital Of Montana ?

What Is The Name Of The Capital Of Montana Country?

Helena  Is The Capital Of Which Country?

Which Is The Capital Of Montana ?

The Capital Of Montana Is Helena